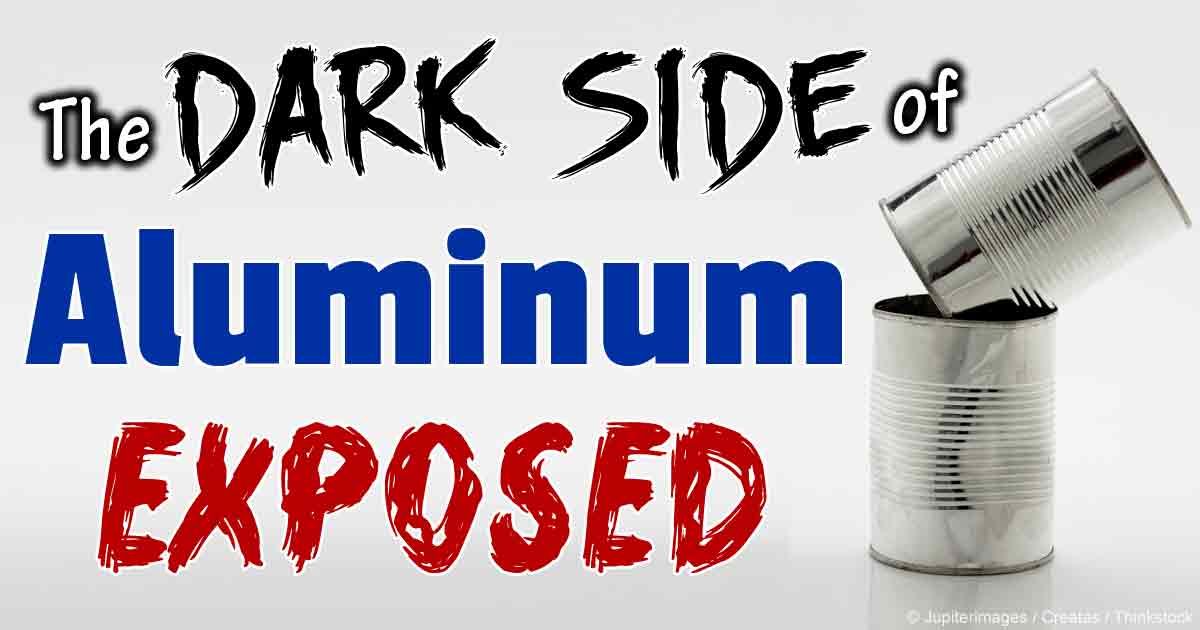 Aluminum has been long known to be neurotoxic, with increasing evidence that consistent exposure is now a factor in many neurological diseases, such as dementia, autism, and Parkinson’s disease.

However, definitive scientific proof is difficult to establish due to the lack of longitudinal studies, as well as pushback from industries that use aluminum in their products. Despite the shortage of conclusive studies, scientific evidence really leaves little room for doubt.

A new case study from Keele University in the UK unequivocally shows high levels of aluminum in the brain of an individual exposed to aluminum at work, who later died from Alzheimer’s disease.

While aluminum exposure has been implicated in Alzheimer’s and a number of other neurological diseases, this case claims to be “the first direct link” between Alzheimer’s disease and elevated brain aluminum following occupational exposure.

The 66 year-old Caucasian man developed an aggressive form of early onset Alzheimer’s disease after eight years of occupational exposure to aluminum dust, which scientists conclude “suggests a prominent role for the olfactory system and lungs in the accumulation of aluminum in the brain.”

This was 16 years after an industrial accident dumped 20 metric tons of aluminum sulphate into her local drinking water. And there are many studies showing elevated aluminum levels in living individuals displaying a wide range of neurological symptoms. 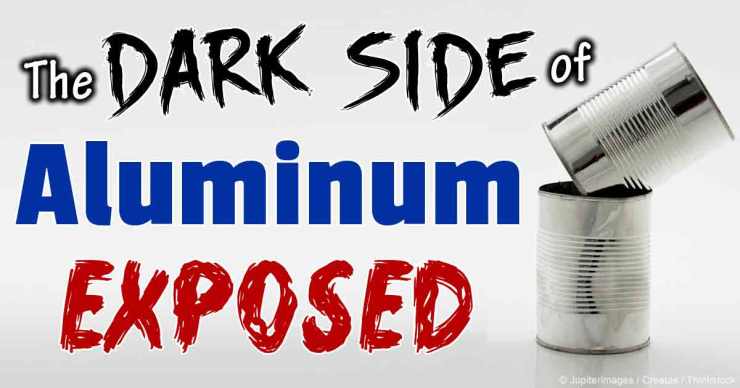 The ‘Dark Side’ of Aluminum Exposed

The featured documentary, The Age of Aluminum, reveals the “dark side” of this toxic metal, exploring the scientific links between aluminum and diseases such as breast cancer and neurological disorders. Also exposed is how aluminum mining and manufacturing have created acute ecological problems across the globe, leading to environmental disasters in Hungary, South Africa, and the UK. In the film, neuroscientist Christopher Shaw reports:

“Many researchers are beginning to accept that aluminum has some sort of role to play in neurodegenerative diseases such as Alzheimer’s. Whether it does in others is still an open question, but Alzheimer’s is really coming into focus and it’s fairly clear that the body burden of aluminum from all the sources to which humans are exposed may be contributing to Alzheimer’s disease.”

Although aluminum occurs naturally in soil, water, and air, we are contributing to the load with the mining and processing of aluminum ores, manufacturing of aluminum products, and the operation of coal-fired power plants and incinerators. Aluminum can’t be destroyed in the environment—it only changes its form by attaching or separating from other particles.

Rain washes aluminum particles out of the air and into our water supply, where they tend to accumulate rather than degrade. If you live in an industrial area, your exposure is undoubtedly higher than average.

According to CDC, the average adult in the US consumes about seven to nine mg of aluminum per day in food, and a lesser amount from air and water. Only about one percent of the aluminum you ingest orally gets absorbed into your body—the rest is moved out by your digestive tract, provided it’s functioning well.

When tested in a lab, aluminum contamination has been found in a vast number of products on the market, from foods and beverages to pharmaceuticals, which suggests the manufacturing process itself is a significant part of the problem. Aluminum is found in a shocking number of foods and consumer products, including:

Does Your Frozen Dinner Come with a Side of Aluminum?

Aluminum contamination in our food supply is a more significant problem than you may think. In a study published in the journal Environmental Sciences Europe,7researchers analyzed 1,431 non-animal foods and beverages for aluminum content. This is what they found:

Aluminum compounds are often used as additives in foodstuffs. Additional contamination occurs when food comes into contact with aluminum equipment and other items because aluminum is unstable in the presence of acids and bases. Aluminum equipment has a protective oxide film, but this can be damaged as fine fissures develop from normal wear and tear.In the study, Table 3 shows the aluminum content of everything from flour and baking mixes to soup, chocolate, beer and wine, and herbal teas. Some products show a wide range of contamination levels, and others are more homogenous. Baked goods are very high because of the common practice of baking and storing foods on aluminum trays. The report has numerous other tables that demonstrate how prevalent this toxin is in your food.

Aluminum Heads Straight to Your Brain

Aluminum is to your central nervous system as cigarette smoke is to your lungs. Scientists are clear that toxic metals damage brain tissue and lead to degenerative disease by producing oxidative stress—and aluminum is one of the worst offenders. With Alzheimer’s rates skyrocketing, today’s multiple avenues of aluminum exposure are of great concern. Just as with particles in the environment, once aluminum is in your tissues, your body has a difficult time releasing it. This toxic metal serves absolutely no biological purpose, so the less of it you ingest, the better.

Once in your body, it travels around easily, unimpeded, piggybacking on your iron transport system. It crosses biological barriers that normally keep other types of toxins out, such as your blood-brain barrier. Over time, aluminum can accumulate in your brain and do serious damage your neurological health—regardless of your age. Aluminum toxicity may be doing as much damage to our children as to our seniors.

Vaccines present a particularly problematic source of toxic metal exposure. Aluminum is the most commonly used vaccine adjuvant and is considered “safe” even though research shows it may induce serious immunological disorders and neurological complications in humans.

In the video above, Dr. David Ayoub discusses how the aluminum in vaccines may be even more dangerous than mercury. The number of aluminum-containing vaccines children receive today has quadrupled over the past 30 years. In the 1970s, children got only four aluminum-containing vaccines in their first 18 months of life, but now they typically receive 17. And as children’s aluminum burden has increased, so has the prevalence of childhood neurological disorders. In one school, 90 percent of the children developed ADHD during the course of a single school year, and their toxicity profiles all revealed massive amounts of aluminum.

Aluminum is also in vaccines and is used as an adjuvant. If you go by the aluminum content on vaccine labels, the amount kids are getting is excessive, but if you add in the aluminum NOT listed on the labels—”accidental exposure” due to contamination—it’s a much more serious problem. Dr. Ayoub cites one study that found five to six times more aluminum in vaccines than what was actually listed on the labels.

When you review the signs and symptoms of aluminum toxicity, they are shockingly similar to the symptoms of autism, ADHD, Alzheimer’s, Parkinson’s, and other neurological diseases. Vaccine adjuvants can cause serious chronic brain inflammation. Aluminum targets your cerebellum and autonomic nervous system—the part responsible for biological processes over which you have no conscious control (breathing, blood pressure, balance, coordination, etc.). When you look at the MSDS sheet for aluminum, you will see symptoms strikingly similar to those in common neurological diseases, including memory problems, speech impairments and aphasia, dementia, depression, muscle weakness, motor disturbances, and other neurological difficulties. The list goes on and on.

There has never been a way to accurately predict who will get Alzheimer’s, but that may be changing. Researchers at Georgetown University and University of Rochester claim they have found a blood test that predicts this with 90 percent accuracy—and incredibly, with NO false negatives. If further research confirms what researchers expect, this is a medical breakthrough of epic proportions.

The test involves measuring the patterns of 10 specific lipids (fat-like compounds) associated with the plaques found in the brains of people with Alzheimer’s disease. These 10 lipids are highly predictive of whether or not you will become cognitively impaired. All of the people in the study were in their 70s, so the next step is to determine if the test is accurate earlier, say in your 40s and 50s. Researchers say they are still several years away from implementing the test, but they all feel very hopeful.

Biomarkers such as lipids are tricky for Alzheimer’s because they change during the course of the illness. Some occur in high levels during the early phase of the disease and then actually decrease after symptoms appear—so they are stage dependent. There is clearly much more research that needs to be done before we have a grasp of this disease. Even with a test that can predict whether or not you are in the process of developing dementia, there are no good treatments once you have it—so you should be doing everything in your power to prevent it. One of the strategies is helping your body detoxify from metals, such as aluminum.

Removing mercury from vaccines and replacing it with aluminum may be increasing the problems from BOTH toxins in your body. The reason for this is because aluminum impairs your body’s ability to excrete mercury by impeding your glutathione production. Glutathione is your most important intracellular detoxifier, required for reversing oxidative stress. So, if your aluminum load is high, your body will potentially become more toxic from the mercury from, say, flu shots and fish because you are now on “aluminum overload” and your detoxification system no longer functions well.

Your body requires sulfur to manufacture glutathione, making sulfur an extremely important dietary nutrient when it comes to metal detoxification, which can be optimized through dietary sources. Onions and garlic are good if they are grown in sulfur rich soils, but most soils are unfortunately sulfur deficient. Therefore, animal-based proteins seem to be one of your best bets. Whey protein concentrate is particularly high in cysteine, one of the two sulfur-bearing amino acids that are direct precursors to glutathione.

Please note that if you avoid consuming animal proteins, it is VERY easy to become sulfur deficient, and this may be one of the most significant risk factors for choosing an animal protein-free diet. That doesn’t mean you should go overboard on meat, however! Most people need only about one gram of protein per kilogram of lean body weight, or about half a gram of protein per pound of lean body mass. Also make sure to buy grass-fed and finished meats, as most factory farmed meat is of inferior quality and contaminated with a whole host of veterinary drugs, including antibiotics and growth hormones.

How to Detoxify Aluminum

There are a number of potent chelators you can use to detoxify aluminum. Clearly, your first step would be to avoid further exposure to aluminum. This means avoiding products such as:

For serious Alzheimer’s disease, the following chelating agents can be helpful: